After Borders, where I micro-fondled the Kobo Reader, I stopped in Sprint. The large posters trumpeting the HTC EVO caught my eye and I figured I’d take the shot. 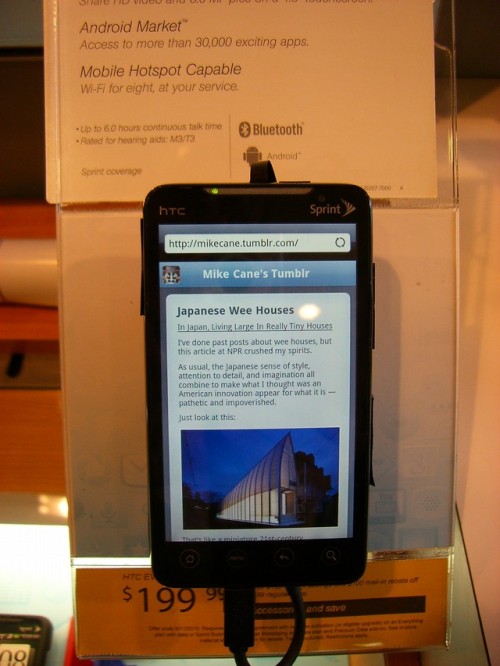 There it is, displaying the mobile version of my Tumblr.

I have to disclose that I’ve not yet fondled the new iPhone 4. I’ve deliberately avoided that because everyone says its high-density screen will ruin my eyes for other screens. So keep that in mind here.

The EVO screen was large, bright, and responsive. There was no hesitation or sluggishness in the few things I tried. All taps registered correctly without any WTFs.

I can’t comment on the time it took to build web pages because it wasn’t clear to me what kind of connection was being made — WiFi or 3G (NYC doesn’t have 4G yet), or how it goes about determining which to use. I wasn’t going to take the time to decipher the row of icons near the top. I really wanted to get in and out because I don’t like being in The Sprint Store. I always feel as if I’m being stared at by everyone (moreso than any place else).

One thing about the browser: double-tap zoom is hinky. And sometimes acts unexpectedly too. In some instances, it won’t center the text area, so you have to nudge the column sideways to center it manually. Other times, it will get it right but then mysteriously reflow the text! I guess I could get used to that second kind of thing, but it was very surprising encountering it due to the iPhone mobile Safari behavior I expected. 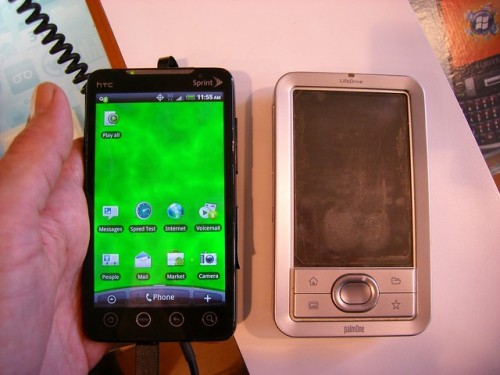 It’s nearly the same size as my LifeDrive. But I think that 0.5″ thickness dimension is wrong. Although I didn’t take a picture, I did a thickness comparision and the EVO was only one-third as thick as my LifeDrive. Perhaps the measurement is at its thickest point — the back slopes — but even then, it is shockingly thinner than my LifeDrive.

I didn’t try any apps — there were few available. And my web testing was limited to Google, The Drudge Report (full web page appeared), Techmeme (mobile version appeared), and my Tumblr. As I said, I really do not like being in The Sprint Store!

One thing I did try was the camera. I used it to try a close-up shot of the text on the signage (seen in the first photo). To do something like that with my current camera, I have to explicitly and manually put in in Macro mode otherwise everything is blurry. I didn’t have to do that with the EVO camera. The text came out very sharp! I didn’t try anything beyond that. I really wanted to get the hell out of there.

One final observation: You really have to look for the Palm Pre and Pixi at The Sprint Store now. There are no signs announcing it and no demo models to fondle. Both are under glass in a counter!