Posted on June 3, 2010 | Comments Off on The IDPF’s Stupid Train Runs Express

The IDPF — International Digital Publishing Forum — has saddled the world with a trademark for an electronic book format that they’ve insisted should be ALL CAPS.

Hell, they even trademarked it that way: 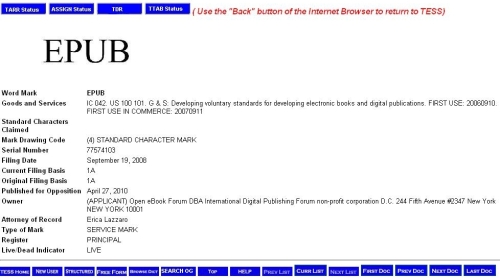 So what to make of their latest stupid move?

END_OF_DOCUMENT_TOKEN_TO_BE_REPLACED

Comments Off on The IDPF’s Stupid Train Runs Express

Having AT&T stab the future yesterday by placing caps on the iPad monthly plan threw a monkey wrench into my own plans.

Right now, I am busy with both kittens and a new piece of peripheral hardware I bought, so getting an iPad is still a week or two away.

And right now, it looks like it will be a WiFi version — with a Sprint MiFi to accompany it. Why Sprint MiFi? Sprint’s 4G gets switched on in NYC in October (or thereabouts). And unless they pull out a knife to stab the future too, the 4G service will have no cap on it.

Posting near non-existent here for the next week or so. I pop onto the Net maybe one hour a day to briefly catch up and to see all the stuff I’m missing.

Comments Off on Otherwise Busy

Leroy Stick – the man behind @BPGlobalPR

I’ve read a bunch of articles and blogs about this whole situation by publicists and marketing folk wondering what BP should do to save their brand from @BPGlobalPR. First of all, who cares? Second of all, what kind of business are you in? I’m trashing a company that is literally trashing the ocean, and these idiots are trying to figure out how to protect that company? One pickledick actually suggested that BP approach me and try to incorporate me into their actual PR outreach. That has got to be the dumbest, most head-up-the-ass solution anyone could possibly offer.

So what is the point of all this? The point is, FORGET YOUR BRAND. You don’t own it because it is literally nothing. You can spend all sorts of time and money trying to manufacture public opinion, but ultimately, that’s up to the public, now isn’t it?

You know the best way to get the public to respect your brand? Have a respectable brand.

And having a respectable brand begins with having someone at the top who can be respected.

A Note To All Corporate Ass-Kissers

Comments Off on The Leroy Stick