Apple Is Scaring Publishers And Writers

The contradictory — no, now it’s outright nonsensical — hand of Apple is at work, rejecting things again.

Apple has rejected an app version of this column—which, on a relatively frequent basis goes out of its way to analyze the odd behavior of Steve Jobs.

The stated reason for the rejection of my free app is that Apple requires “sufficient amounts of content to appeal to a broad audience.” Putting aside the fact that this pretty much makes specialty content ineligible for iPhone or iPad apps, it’s also a pretty fudgy standard.

What if I wanted to publish an app that was a specialist’s tool? It could be anything. Some obscure aspect of metadata organization, or a compilation of medical research material, or even a collection of presentations about software theory, anything that would have a very limited yet actual audience. Is Apple going to deny me the chance to earn that money? Because, in Apple’s eyes, I’m not appealing to the great wad of people out there who own and buy its devices?

By that standard alone, what are eBooks doing on the iPad and upcoming on the iPhone? This is what Steve Jobs himself stated:

And yet it seems that they must, because here’s Steve pimping iBooks and the iBookstore and even citing Amazon! 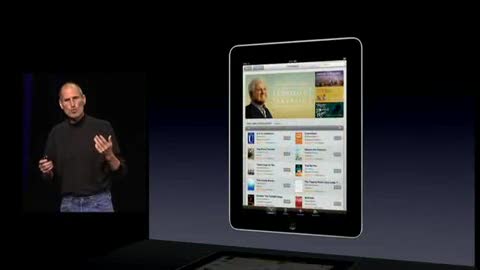 It seems to me the iPhone and iPod Touch would be a tool many golfers — amateur and professional — would own (I will not go digging through the mess of the App Store to enumerate golf games or golf apps to bolster this hypothesis). That has to be a large audience. Some of those people might even want to part with their own money to make fun of Tiger Woods’ indiscretions. This is an app with a limited lifespan too. Why couldn’t Apple have let it through and watch it go away from lack of sales in 3-6 months? Do they really think Tiger Woods would — or even could — sue?

That Wired article also brings up points I brought up originally when Apple first slammed its fist into a proposed comic book. Except no one except me was paying attention then to where all of this could lead.

It’s not just entertainment. Scholars and teachers are now wondering about Apple interfering in possible courseware: Apple and Censoring Education

But take this even a step further, beyond “bookish” content, there is a range of material that I would want to make available to my class which Apple might chose to ban (and I am not even talking about the illegal stuff here). Consider, I have (and probably will continue to) teach Super Columbine Massacre RPG! Clearly this is content someone might find “obscene” or “defamatory” how do I know what Apple’s judgement on this is going to be? Is this really a decision I want to turn over to Apple? Indeed by allowing a locked down device into the classroom, especially if one makes it the center piece of a technology in the classroom movement this is precisely what will happen. Apple will have control over what type of content students can place on these devices.

If Apple isn’t going to listen to me, it damn well should start listening to the other people who are now forming a chorus!

Apple, you are not a publisher. Stop trying to think you are. You are also not an arbiter of taste — you have no defense when you permit fart apps.

When an app enters the submission process, if that app has content, it should be guided to someone who has publishing experience (and if you don’t have such a person, why the hell not?). Someone who understands the battles that have been fought for freedom of expression and someone — not your current crop of lawyers — with legal experience in that particular field.

And really, what are you doing interfering in cases like this when the TOS for your iTunes software includes this clause:

You understand that by using any of the Services, you may encounter content that may be deemed offensive, indecent, or objectionable, which content may or may not be identified as having explicit language. Nevertheless, you agree to use the Services at your sole risk and that Apple shall have no liability to you for content that may be found to be offensive, indecent, or objectionable. Content types (including genres, sub-genres and Podcast categories and sub-categories and the like) and descriptions are provided for convenience, and you acknowledge and agree that Apple does not guarantee their accuracy.

Certain Services may include materials from third parties or links to certain third party web sites. You acknowledge and agree that Apple is not responsible for examining or evaluating the content or accuracy of any such third-party material or web sites. Apple does not warrant or endorse and does not assume and will not have any liability or responsibility for any third-party materials or web sites, or for any other materials, products, or services of third parties. Links to other web sites are provided solely as a convenience to you. You agree that you will not use any third-party materials in a manner that would infringe or violate the rights of any other party, and that Apple is not in any way responsible for any such use by you.

Boldfaced emphasis added by me.

What is the point of that if you’re not going to abide by it yourself?

How many more posts like this will I have to do, Steve Jobs?

Let this be the last one!

Apple Forfeits eBooks By Banning A Comic Book!
Apple And A Tale Of Two Bannings
Apple Bans ANOTHER Book From App Store!
Apple Approves Of Shooting Nurses In The Face!

Previously at The eBook Test:

Apple: Get The Hell Out Of Your Own Way!
Another Day, Another DoubleDumb Apple Book Rejection!
Apple’s Two-Faced Censorship At Work Again
A REAL Justification For Apple Censorship?

6 responses to “Apple Is Scaring Publishers And Writers”